The international community closely watched US-North Korean tensions this week as President Donald Trump and dictator Kim Jong-Un further escalated the arms race by boasting about their respective true strength. For several weeks, Trump and Un have been jawing back and forth about who is the stronger man, dubbed the “arms race.”

Trump tweeted on Monday, “Little man Kim Jong-Un knows nothing about making gains! His weak and feeble stature is no match for my powerful physique, and, should we ever need to use my weapons of mass destruction, I would win, WITHOUT A DOUBT!”

Supreme Leader Un fired back at Trump, saying via state media “I am, far and away, in much better shape than President Trump. We had a Planet Fitness open just a couple months ago and look what it’s done for me!” Supreme Leader Un then ripped his suit off and began flexing for the media.

The conflict began when Kim Jong Un posted an Instagram video of himself bench-pressing 125 kgs [275 lbs] with the caption “Upper body as powerful as North Korea [Tongue out emoji].” Trump’s initial response was attending a press conference shirtless and only answering questions with details of his workout regimen.

Since this initial skirmish, there has mostly been a game of one-upmanship between Trump and Un. Trump has attacked Supreme leader Un’s advantage with having an entire Planet Fitness to himself, saying “He doesn’t know how to work for the muscles! When I started, I only had a bowflex home set and off-brand protein powder!”

At press time, President Trump was seen recording a workout video for the country. 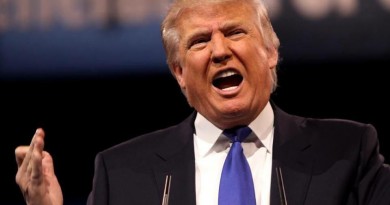 Trump Calls For Deportation Of All Women With Blonde Hair, Blue Eyes

January 28, 2016 Comments Off on Trump Calls For Deportation Of All Women With Blonde Hair, Blue Eyes 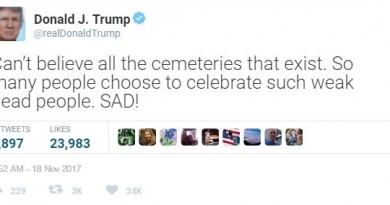 November 18, 2017 Comments Off on Trump Bashes the Dead; Calls Them “Weak”

Trump Dips In Polls After Failing To Alienate Minority

April 4, 2016 Comments Off on Trump Dips In Polls After Failing To Alienate Minority